Two new Omicron variants are spreading. Will they drive a new U.S. surge?

The subvariants BA.4 and BA.5 may dodge immunity, especially in unvaccinated people, possibly causing a spike in infections worldwide. 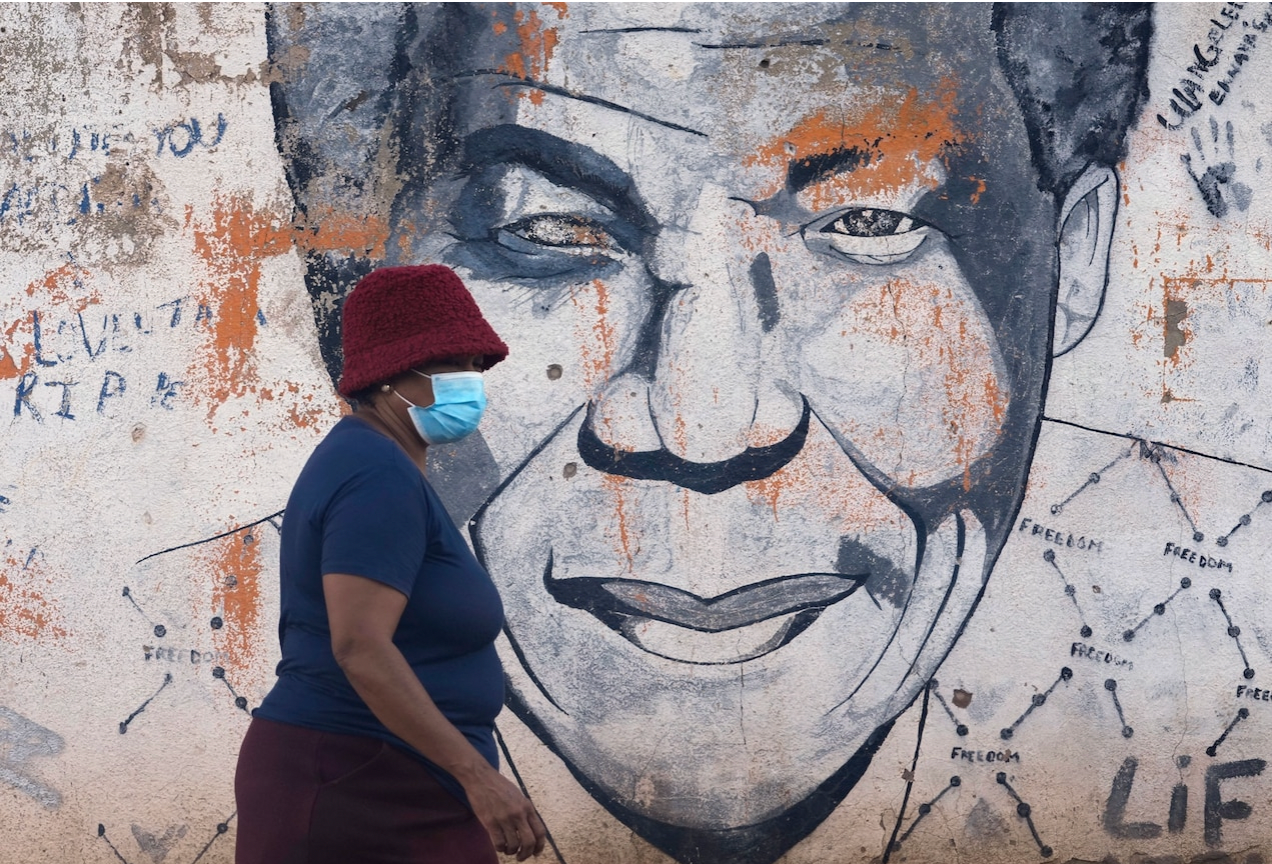 A woman walks past a mural of former president of South Africa, Nelson Mandela, in Katlehong, east of Johannesburg, South Africa, Friday, April 29, 2022. South Africa's health minister says it is likely the country has entered a new wave of COVID-19 earlier than expected as new infections and hospitalizations have risen rapidly over the past two weeks.PHOTOGRAPH BY THEMBA HADEBE, AP PHOTO

New versions of Omicron are again causing a surge of COVID-19 cases in South Africa, and studies show that these new subvariants are so different from the original version of Omicron that immunity generated from a previous infection may not provide much protection.

Dubbed BA.4 and BA.5, the new subvariants are nearly identical to each other, and both are more transmissible than the Omicron BA.2 subvariant. In South Africa, they replaced the BA.2 strain in less than a month. They are now responsible for a spike in South Africa’s COVID-19 cases, which have tripled since mid-April.

'If you were unvaccinated, what you got is almost no immunity to BA.4 and BA.5,' says Alex Sigal, a virologist at the Africa Health Research Institute and at the University of KwaZulu-Natal. 'There might be some immunity that may be enough to protect against severe disease, but not sufficient to protect against symptomatic infection.'

South Africa is the worst hit country on the continent, with more than 100,523 official deaths from COVID-19—and that’s likely a gross underestimate according to a recent study in The Lancet. With BA.4 and BA.5 now on the rise, the death toll is likely to grow, as only a third of the South African population has received a COVID-19 vaccine; the rate of vaccination is even lower in the rest of Africa.

For now, the subvariant known as BA.2.12.1 remains dominant in the U.S., causing new hospitalizations to spike in the last week by more than 17 percent nationally and by as much as 28 percent in the Great Lakes area, and Washington D.C. and the surrounding region. But the new subvariants have spread to more than 20 countries across North America, Asia, and Europe, and already 19 cases of BA.4 and six cases of BA.5 have been identified in the U.S.

How are BA.4 and BA.5 different from other Omicron variants?

South Africa has become a bright spot within Africa for sequencing samples of SARS-CoV-2. This swift sequencing was critical in alerting the world in December 2021 to the discovery and surge of the original Omicron strain, called BA.1. Now the same team has discovered BA.4 and BA.5.

'The BA.4 and BA.5 sub-variants were identified because South Africa is still doing the vital genetic sequencing that many other countries have stopped doing,' said Tedros Adhanom Ghebreyesus, the Director General of the World Health Organization, at a press conference on May 4. 'In many countries we’re essentially blind to how the virus is mutating. We don’t know what’s coming next.'

That sequencing has revealed that for both BA.4 and BA.5, the spike protein is similar to the one in BA.2, except for six mutations. The spike protein is the part of the SARS-CoV-2 virus that anchors to receptors on human respiratory cells and allows the virus to infect the cell.

'The three modifications present in the spike of BA.4 and BA.5, compared to BA.2, are most likely associated to antibody escape and improved viral fitness and binding to the ACE2 receptor,' says Olivier Schwartz, head of the Virus and Immunity Unit at Institut Pasteur in France.

Two of the changes on the spike can make these viruses more infectious, says Ravindra Gupta, an immunologist and infectious diseases specialist at the University of Cambridge in the U.K. as shown by his previous research. The upside is that these same mutations make it easy for researchers to rapidly distinguish the new subvariants from BA.2 in a standard PCR test.

Another mutation present in BA.4 and BA.5 is also found in other variants of concern, including Delta, Kappa, and Epsilon. It increases infectivity and weakens immunity from existing antibodies, according to a preliminary study from China.

The Chinese study also shows that a rare change seen before only 54 times among 10 million viral sequences helps BA.4 and BA.5 to evade BA.1-specific antibodies. This same mutation also enabled SARS-CoV-2 to infect mink and ferrets during April 2020 outbreaks in mink farms.

In addition to these spike protein mutations, BA.4 and BA.5 also have small changes in viral proteins whose exact function are not well known.

A preliminary genetic analysis estimates that the new subvariants may have originated in South Africa at around the same time as other Omicron variants, in mid-December 2021 and early January 2022, respectively. But scientists don’t yet know their origin for sure.

'BA.4 and BA.5 may well have originated from the same kind of common source as BA.1, BA.2, and BA.3, but it's not certain,' says Richard Lessells, an infectious diseases doctor at the University of KwaZulu-Natal in Durban, South Africa. He is part of the nation’s sequencing team that discovered all of these Omicron variants.

Possible routes of evolution may have been an animal host, such as a mouse; or it may have gestated in some immunocompromised patients, as has been shown to occur through accumulation of mutations during a chronic infection by Gupta.

'The alternative is that BA.4 and BA.5 may have evolved from BA.2,' says Lessells.

B.4 and BA.5 dodge previous immunity

In the first study of BA4 and BA.5 on immunity, which has not yet been peer reviewed, scientists led by Sigal, of the Africa Health Research Institute, isolated live viruses from nasal swabs. The scientists then ran tests to see whether antibodies from unvaccinated and vaccinated people who had been infected with the original Omicron BA.1 strain just a few months ago were able to neutralize these new variants. Sigal’s team discovered that these antibodies weren’t able to protect against symptomatic infection.

That’s concerning, because in low- and middle-income countries less than one in six people have yet received a single dose of any COVID-19 vaccine. Even in the United States, nearly 23 percent of the population remains unvaccinated.

'BA.4/5 data are interesting and somewhat surprising,' says Gupta, referring to the sharp decline in immunity seen in studies so far. 'It is greater than I would have predicted,' he says. 'It may be that [the] biology of this virus has completely changed in terms of how quickly it's able to evolve.'