With Covid-19 now growing by leaps and bounds in South Africa, a Mail & Guardian survey has spotlighted the nationwide shortage of staff, equipment and facilities needed to cope with the infected people who are set to flood the healthcare system when the outbreak hits its peak. 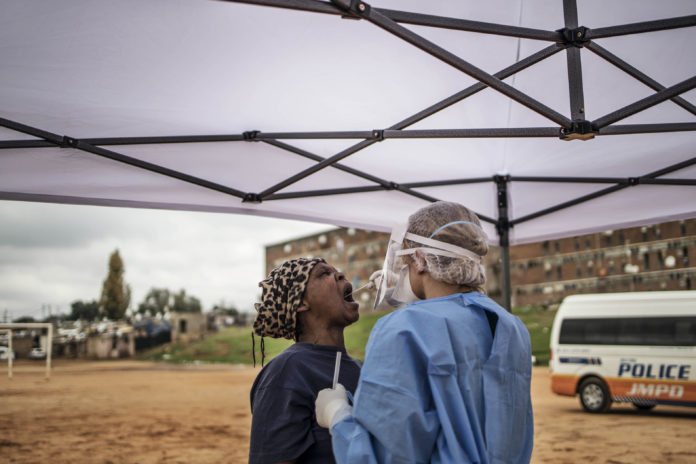 With Covid-19 now growing by leaps and bounds in South Africa, a Mail & Guardian survey has spotlighted the nationwide shortage of staff, equipment and facilities needed to cope with the infected people who are set to flood the healthcare system when the outbreak hits its peak.

Over the past few weeks, the number of infections has been rising rapidly. New positive cases are doubling every second week and in the past week have averaged about 4?000 a day.

The projected 'peak' differs from province to province. In Gauteng, for example, it is now predicted for mid-August whereas in the Western Cape, it is expected to take place at the end of the month or in July.

Gauteng's health MEC, Bandile Masuku, is preparing for the worst. Asked whether he thought the province was ready for the projected surge, he said: 'We are anxious about everything — because we're not sure of how the spread's pattern will look and we can't even be sure of the numbers.

'Remember that modelling only gives us an idea. It is not the actual numbers we are going to hit.'

Masuku also revealed that the expected peak in Gauteng has been brought forward by two weeks. Based on data released by the National Institute for Communicable Diseases, a total of more than 8?000 infected people have already been admitted to about 300 hospitals across the country so far.

Currently, about 3?000 are hospitalised. This is double the figure of a month ago, and the number may double again over the month ahead.

The national lockdown imposed in March was intended to buy time for the authorities to cushion the country against the full brunt of the pandemic.

The consensus among provincial government officials and experts — including a top executive of the South African Medical Research Council — is, however, that the country is almost certainly unprepared to deal with the looming emergency.

In many countries where infections have peaked, public health systems were overwhelmed by the sheer number of people needing medical attention.

Notable examples have been Italy, the United States and India, where sick people have reportedly been turned away from care facilities, reinforcing the crisis and adding to the death toll.

The shortage of qualified health workers, aggravated by the high rate of infection among staff, is seen as a major obstacle. More than 2?000 care workers have contracted the disease in South Africa. In a last-ditch attempt to offset staff shortages, the Western Cape is appealing for volunteers. 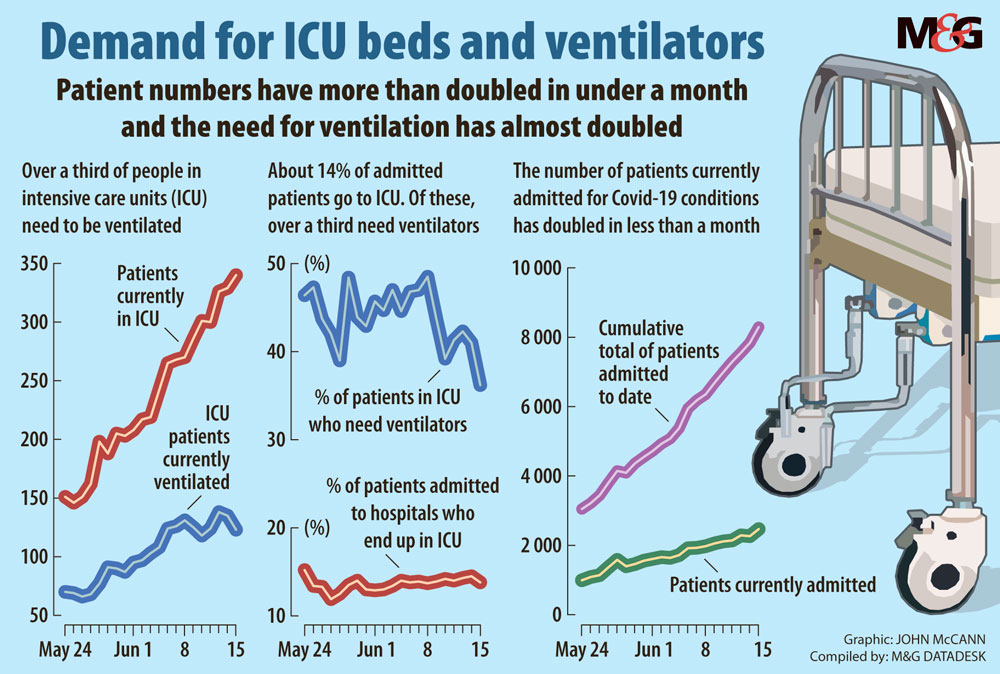 The drop from a high of 65% of the countrywide total two weeks ago does not reflect a drop in the incidence of the disease in the province. It reflects a sharp increase in infections in other provinces, particularly Gauteng.

Interviewed this week, Western Cape Premier Alan Winde said that, based on the most recent modelling at the end of May, the province would need a total of 1?500 critical care beds for the peak.

'The model predicts a requirement of 6?300 acute care beds — 2?257 more than available in our permanent healthcare system. Over 1?400 of these will be created in our temporary hospitals at the CTICC [Cape Town International Convention Centre] and in Khayelitsha that are complete. Others are under way,' he said.

These hospitals will be vital, as current projections show that they could overflow when the numbers peak at the end of this month, or in July.

The Western Cape's model predicts a cumulative total of 9?300 deaths. But, based on more pessimistic projections released last month by the South African Covid-19 Modelling Consortium, the province is on a worst-case trajectory, which will continue to worsen.

Its current tally of deaths and positive cases should only have been registered next month. Based on the pessimistic prediction, by August there could already be 5?000 deaths in the province, with 4?000 ICU beds needed and more than 51?000 people requiring hospital admission.

The premier said the province has been working night and day to prepare for the peak. Yet the shortage of health workers was an obstacle which the provincial authorities were trying to address through a recruitment drive, by calling for volunteers and through discussions with the national government on the possibility of recruiting staff from other provinces and military health workers.

Professor Shabir Madhi, a director at the South African Medical Research Council, said it was 'very unlikely' that the country had the capacity to deal with what was coming its way.

'It is going to get much worse,' Madhi said.

He added that the Western Cape was nowhere near peak. Gauteng was about three to four weeks away from it in terms of hospital cases.

Given the density and poverty of many of its townships and the inner-city, the death and infection rates in Gauteng had been surprisingly moderate.

Active cases in the province more than tripled in the first two weeks of June, coinciding with the easing of the lockdown. Active cases currently stand at 10?817.

The province's own projections show that cases will peak at least two weeks earlier than predicted. Before the recent surge in Covid-19 infections in the province, officials were expecting a peak in September.

Masuku said he wanted to avoid the 'unfortunate' definition of the word 'peak' as implying that health facilities are overwhelmed to the point of collapse.

'We cannot prepare for a failure like that. We should prepare for a peak that will allow the system to cope without collapsing,' he told the M&G on Wednesday afternoon.

Last month, when the South African Covid-19 Modelling Consortium released its projections, Gauteng was on an 'optimistic' trajectory. But at 388?000 cases of the disease expected by August, it is still alarming.

Masuku said the healthcare system should be able to handle a daily average of between 15?000 to 25?000 people. But, according to data released by the Gauteng government last Friday, the province currently has just over 8?301 beds across both public and private sectors.

About ventilators Masuku said: 'There has been a lot of changes in the management of patients with Covid-19. Ventilators are required at an advanced stage of the disease. But they are not the primary equipment for treatment … we have estimated that less than 2% will require ventilators. Even in the Western Cape they have not ventilated more than 5% of their patients.'

Earlier this month Masuku's department received 1?000 ventilators donated by the US. The provincial government is in the process of procuring more, though the wait time for them is between four and six weeks, he said.

It is also finalising the appointment of between 600 and 800 additional workers to help carry the load, though detractors — such as the Democratic Alliance's provincial health spokesperson Jack Bloom — say these appointments should have been made much earlier in the lockdown.

The Eastern Cape's 'command council' has openly conceded that the province is unready for the peak.

In its report, released last week, the council says: 'It would appear that the Eastern Cape does not have enough capability in place to manage the demand of the pandemic. Unless capabilities are exponentially and rapidly increased, the province will experience demand exceeding supply.

'It would appear from the data that the lockdown did not produce the required increase in capacity.'

The province has spent R78-million on protective gear (PPE), and another R10-million on 100 motorbikes that are meant to assist medical workers with travelling on difficult terrain.

The number of positive cases continues to rapidly escalate.

The province has the second-highest number of deaths at 245, and more than 12?000 positive cases, placing it on a pessimistic trajectory which could result in 18?000 positive cases by the end of June and 212?000 by August, with 2?000 deaths

Tlamelo Mothudi, a researcher for the Public Service Accountability Monitor, said the province is far from being ready to handle a peak in positive cases.

'We understand that Covid-19 is a new disease and the shortage of PPE has been reported worldwide. But I think the Eastern Cape has failed to properly detail how it will tackle this pandemic.

'Health workers have been complaining about the shortage of PPE and poor working conditions in hospitals and clinics. You can't say you're fighting a pandemic if the people on the frontline are not properly equipped. This is what they should have focused on first,' says Mothudi.

Provincial health spokesperson Sizwe Kupelo told the M&G they only have 113 ICU beds and need 127 more.

'We have 3?040 general hospital beds that we are planning for but now only have 1?632. Fifty-two ventilators are available and we are still waiting for 90 more,' said Kupelo.

Addressing the media in Pietermaritzburg last Sunday, KwaZulu-Natal Premier Sihle Zikalala said the province is 'now in the actual battle zone'. At the time, the province had 3?874 cumulative cases. By Wednesday this week, it had 4?238 cases, 2?032 of which were still active.

Zikalala said that since the start of the lockdown, the province had created 7?111 beds for Covid-19 patients. Optimistic projections say by August 2?000 people in KwaZulu-Natal will be in need of ICU care and about 8?000 will have to be admitted to hospital.

The modelling consortium predicted that the province could see fewer than 1?000 deaths by then.

Dr Richard Lessells, an infectious disease specialist at the KwaZulu-Natal Research Innovation and Sequencing Platform, said a lot of work has been done over the past three months to prepare for the peak in the province.

'But what the virus has shown us is that you don't know if you're prepared until it has hit you hard … So we certainly hope that we are prepared, but we acknowledge that there will probably still be gaps.'

Lessells added that though the turnaround time for testing is the quickest in KwaZulu-Natal — about six days — 'this is still too long'. By last week Thursday the province had conducted 167?422 tests.

'That's a worry. But I think we are still far too focused on the number of tests that are being done and not on whether the tests are actually resulting in the appropriate action in a timely fashion,' he said. 'Because doing however many tests is irrelevant if they are not getting the results quickly enough to take the right action.'