As schools get ready to reopen, models suggest the country will still not have enough ICU beds at the virus peak. In the meantime, court battles rage while unions fight to keep miners safe. 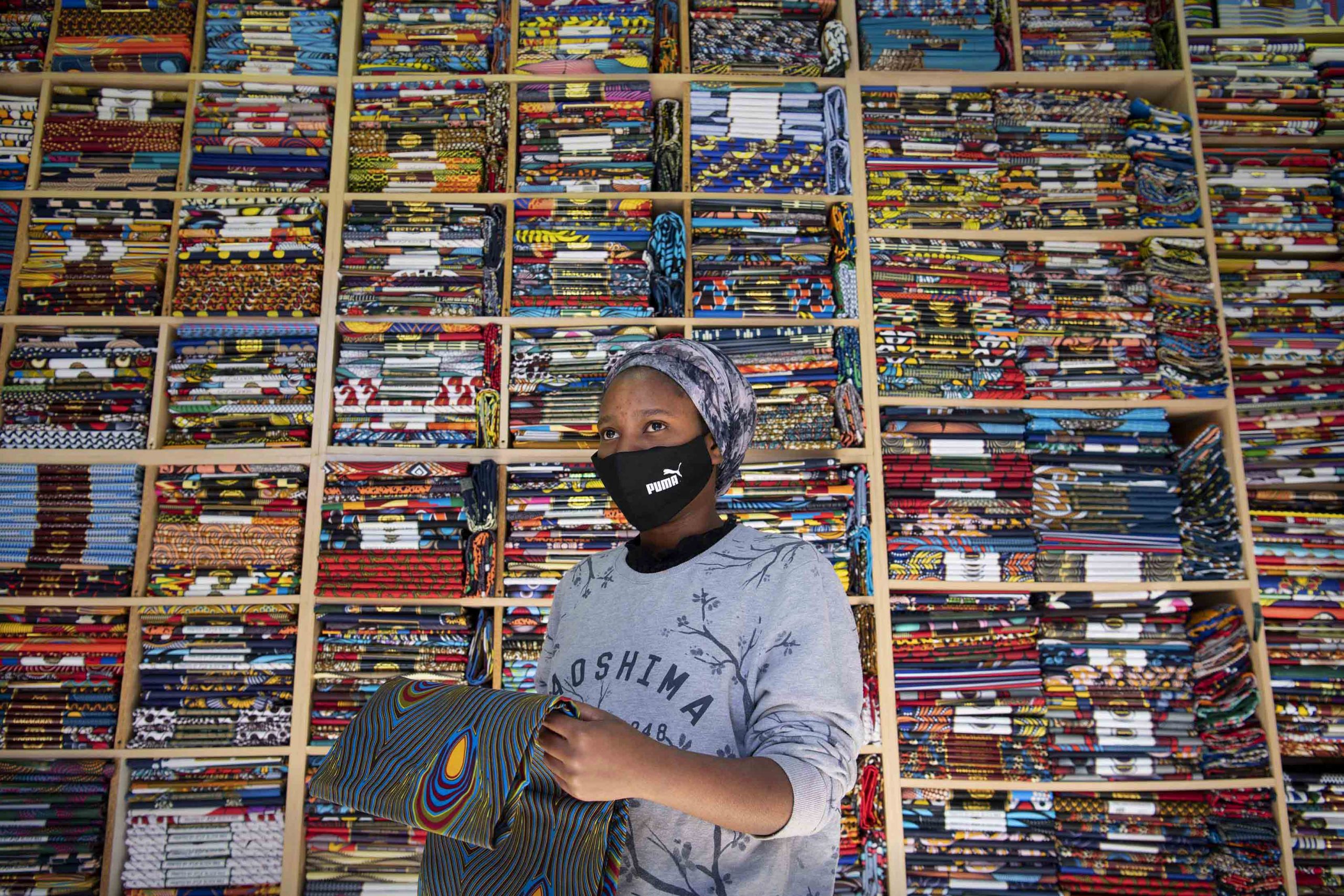 20 May 2020: Charity Kazisonga shops for fabric in downtown Johannesburg. As lockdown restrictions ease more South Africans are coming out to buy supplies for Covid-19 and impending winter.

Learners on the move

Pupils from grade seven and matric will head back to school on 1 June 2020. The other grades will follow slowly. 'There was always a certainty that school would have to be reopened, said Department of Basic Education Minister Angie Motshekga this week. 'Cabinet agreed that as much as it was important to save the academic year, key principles to guide our work should be informed by the safety of learners, teachers and workers in our schools while ensuring that the reopening of schools does not contribute in any way to the spread of the virus.'

The basic education department entered into an agreement with Rand Water and the Department of Human Settlements, Water and Sanitation to ensure that no school goes without water. 'The success of the reopening process depends on the availability of basic services, said Motshekga.

The education department is also working with the Department of Transport to ensure that safety protocols are maintained as pupils travel to and from school. Everybody must sanitise their hands before getting on any buses and distance must be maintained during travel. All learners will have to wear masks throughout the school day.

A new school calendar will be gazetted to indicate opening and closing dates as well as holidays.

In Cape Town, an urgent interim court interdict was granted against the City of Cape Town this week for using its bylaws to evict Singabalapha residents.

The shack settlement, which comprises 21 homes near the city centre on Observatory's Main Road, was visited on the morning of 20 May by what residents described as a large number of law enforcement officers.

'[The officers] forced us to sign bylaw fines of R300 ... or R1000 per person to punish us for refusing to leave our homes, Singabalapha secretary Sinazo Jordan said. '[They] also assaulted and detained two young residents and Singabalapha's chairperson, who is also an elderly and chronically ill patient. They let them go after forcing them to sign the bylaws notice. One of our residents [was] arrested, handcuffed and taken to Woodstock Police Station where he was given an ultimatum that he would be charged and locked up if he did not sign the bylaw fines notice.'

The community successfully applied for an urgent interdict that says the City may not harass residents, evict them or confiscate their goods. The application for a permanent interdict will be heard on 3 June.

The City of Cape Town has approached the high court to seek an interdict against the South African Human Rights Commission (SAHRC) to stop them from accessing the Strandfontein emergency shelter for the homeless.

The SAHRC, represented by the Legal Resources Centre, is opposing the interdict on constitutional grounds. They argue that it unjustifiably limits fundamental powers of the commission as a human rights monitor.

The Women's Legal Centre together with the Centre for Applied Legal Studies have joined the case as friends of the court. They argue that the City's application is without merit and that it seeks to deter human rights monitors from doing their job - at a time when human rights are severely limited by lockdown regulations.

The matter was supposed to be heard on Wednesday 20 May but was postponed. The case will have far-reaching consequences for the constitutional powers and independence of the SAHRC and human rights monitors in general.

A mining code of practice was gazetted on 18 May after a judgment by the labour court compelling government to publish mining safety guidelines. This is after an application by the Association of Mineworkers and Construction Union (Amcu) to ensure the safety of miners and to curb the spread of Covid-19.

Mines were allowed to partially resume operations under 'strict health conditions on 1 May following a move to lockdown level 4. Amcu has previously argued that a premature return to work could pose a major risk as miners are transported in small lifts and work in cramped conditions, making social distancing impossible. They could also carry the virus home to shack settlements.

On 20 May, the National Union of Mineworkers in Limpopo called for a temporary closure of all mines after Covid-19 cases soared. The next day, new cases were reported at Harmony Gold's Kalgold mine. Earlier in the week, Impala Platinum's Marula Mine in Limpopo temporarily shut down after 19 mineworkers tested positive. Two other mines, Modikwa Platinum mine and Dwarsrivier Chrome, also confirmed cases.

The newly gazetted guidelines, which come into effect on 25 May, are aimed at preventing, mitigating and managing the Covid-19 pandemic at mines, but they have been described as a restatement of old guidelines already adopted by the mining industry.

They state that mining companies should ensure employees with pre-existing conditions do not return to work as they are more at risk of getting severely ill. Miners often suffer from lung-related illnesses such as tuberculosis and silicosis. In most confirmed cases, miners are asymptomatic. But there are concerns that employers will use the guidelines as an excuse to retrench workers.

Amcu and other unions have called for an increase in testing for the virus of the over 400 000 miners in the sector. By 18 May, just under 2 000 of them had been tested.

On 22 May, the EFF political party called for all non-essential mine work to stop, stating it would seek legal advice on how to halt mining activity because of the sector's reputation 'for poor health and safety standards'.

The party said opening up mines in the wake of the Covid-19 pandemic 'is to endanger not only mineworkers but their families and communities, most of whom reside in squalor and informal settlements where social distancing is not possible'.

An investigation into the Covid-19 outbreak at KwaZulu-Natal's St Augustine's Hospital has found that between 9 March and 30 April, there were 119 confirmed cases at the hospital. Of these, 39 were patients and 80 were staff members. According to the report, 15 of the 39 patients died.

The findings and recommendations, which were released on 20 May, were led by University of KwaZulu-Natal employees Richard Lessells, Yunus Moosa and Tulio de Oliveira, bringing together expertise in infectious diseases, epidemiology and viral genomics.

'The most plausible explanation for the outbreak is that there was a single introduction of the [virus] to the hospital in early March, most likely through transmission from a patient being assessed for Covid-19 in the emergency department to another patient being admitted at the same time with a suspected stroke, reads the report. It was found that the virus then spread widely through the hospital, involving patients and staff members in at least five different wards.

The recommendations made by the team of experts include establishing separate zones for people at different levels of infection, limiting the movement of staff and patients between wards, and mandatory training on the virus, especially on infection prevention and control.

South Africa's Covid-19 mathematical modelling, which was released on 19 May, estimates that by the end of November the country could have 40 000 Covid-19 deaths.

The model, which is a projection of the work of different experts, is used as a mechanism to guide the country on how to respond to the pandemic. Modellers explained that there are too few intensive care unit (ICU) beds in both private and public hospitals to accommodate all Covid-19 patients.

During an open symposium, modellers presented the data and strategies that were given to the Department of Health. One of the modellers, Juliet Pulliam, showed that social distancing and the lockdown have worked to flatten the curve and delay a wider spread, 'although not sufficiently to prevent the bridging of ICU beds'.

'Approximately 12 to 13 million symptomatic cases are predicted by the beginning of November, with between 475 000 to 680 000 requiring hospitalisation, she added.