In The Lancet Infectious Diseases, John Gregson and colleagues report the results of a meta-analysis investigating HIV-1 drug resistance in 20 studies from sub-Saharan Africa.

Gregson and colleagues included patients with failure of first-line tenofovir disproxil fumarate (TDF)-containing antiretroviral treatment (ART) regimens that also included first generation (nevirapine and efavirenz) non-nucleoside reverse transcriptase inhibitors (NNRTI) and a cytosine analogue (lamivudine or emtricitabine) - the WHO-recommended first-line ART regimen.2 They found a substantial prevalence of thymidine-analogue mutations (TAMs) among patients who had treatment failure (115 [16%] of 712 patients), which was a somewhat unexpected fi nding, and TAMs were signifi cantly associated with the presence of resistance to TDF, NNRTIs, and cytosine analogues.

TAMs are selected for by zidovudine and stavudine, drugs that were replaced by TDF in the WHO guidelines in June, 2013. However, more than 3.5 million people are estimated to be still using zidovudine, often switching to TDF without plasma HIV-1 RNA monitoring if their CD4 cell counts remain stable. Furthermore, stavudine can select for the Lys65Arg mutation in HIV-1 reverse transcriptase, which aff ects subsequent TDF activity.

Gregson and colleagues' study builds on an important previous report, the results of which showed an alarmingly high prevalence of drug resistance in people who had treatment failure on TDF-containing first-line regimens, with the highest proportion of resistance (up to 57%) identifi ed in sub-Saharan Africa.3 People who have treatment failure on first-line ART with either efavirenz or nevirapine in Africa typically have high prevalence of resistance against nucleoside reverse transcriptase inhibitors and NNRTIs, including more than 70% of patients with at least one mutation and 50% with dual-class resistance.4

Previously undisclosed ART exposure and failure with NNRTIs could be the major driver of TAM selection and associated resistance in these apparently first-line cases of treatment failure. Patients with TAMs had signifi cantly lower CD4 cell counts at baseline than did patients without TAMs, the presence of TAMs was unrelated to HIV-1 subtype (most patients had subtype C), and the prevalence of NNRTI resistance was not signifi cantly increased in women who received single-dose nevirapine for the prevention of mother-tochild transmission of HIV.

Transmitted HIV-1 resistance is not routinely screened for in sub-Saharan Africa, whereas screening is specifi cally recommended in well-resourced countries.5 In the absence of pretreatment resistance screening, the recommendation is to avoid use of NNRTIs. Nonetheless, NNRTIs are actually the preferred and so far only initial regimens available in most countries in the region.2

Gregson and colleagues claim that doing resistance testing could mitigate the emergence and spread of such resistant viruses. Early detection of failure helps to limit the accumulation of resistance. Although implementation of point-of-care routine viral load measurements and resistance tests would obviously be welcome, they would only partly mitigate the emergence of these dual-class resistant strains that jeopardise the eff ectiveness of standard second-line ART. Implementation of these essential measures will need extra budgets and time, but time to prevent the spread of these resistant strains might be limited.

Strategies to prevent HIV-1 resistance are a global priority. After the scale-up of ART in Africa, increasing numbers of patients have pretreatment drug resistance. However, networks monitoring this issue face challenges in the form of funding limitations, constraints on human resources, vulnerable health infrastructure, and drug stock-outs.6 Furthermore, individual-level resistance testing before ART initiation is generally considered not to be cost-eff ective, irrespective of the cost-eff ectiveness threshold used.7 Although optimum resource allocation to reduce HIV-1 incidence, mainly through treatment-as-prevention, is being fi ne-tuned, local prevalence of HIV-1 resistance could reverse all these benefi ts. Needless to say, concern over resistance should not stop the expansion of ART availability, but the prevalence of resistance is projected to increase substantially.8

The lessons learned from tuberculosis cannot be allowed to fall into oblivion. In the African region, which has the highest burden of HIV-associated tuberculosis, the selection of resistant tuberculosis has achieved alarming rates. Some countries report multidrug-resistant tuberculosis in 5% of new cases and 25% among previously treated patients.9 The HIV-1 epidemic has the potential to resemble tuberculosis in this region. Transmission of HIV-1 resistance has been limited in the fi rst years of ART scale-up, but the prevalence of resistance is heterogeneous (1.1-12.3%), failure of fi rst-line ART ranges from 15-35% at 48 weeks,10 and development of resistance after failure is high.1,11 The odds ratio for HIV-1 resistance associated with each additional year since the start of ART roll-out in this region is 1.38 (95% CI 1.13-1.68).11 Resistance surveillance and prevention is therefore a priority.

WHO still recommends efavirenz plus TDF plus lamivudine (or emtricitabine) as the preferred fi rst-line regimen. However, dolutegravir has been introduced for the fi rst time as part of alternative regimens.2 This new integrase inhibitor has superior effi cacy to efavirenz and low toxicity, making it a preferred option worldwide.5 Dolutegravir has a unique feature of particular interest in Africa: in triple-drug regimens it does not select for resistance at the failure of initial ART. So far, none of 1366 patients included in phase 2/3 studies for 48-144 weeks has developed resistance to either the integrase or the reverse transcriptase.12 This high barrier against the development of resistance in initial therapy could be live-saving in sub-Saharan Africa if properly used. Generic dolutegravir received tentative approval from the US Food and Drug Administration in September, 2016, allowing the product to be launched in the US President's Emergency Plan for AIDS Relief market. This is a one-of-a-kind agreement between innovator and generic companies whereby the generic version has been launched only about 3 years after the original product. While stakeholders are escalating the implementation of human and infrastructure networks in sub-Saharan Africa, a straightforward and cost-eff ective measure to limit new HIV-1 resistance would be to scale up the substitution of efavirenz for generic dolutegravir in initial ART. 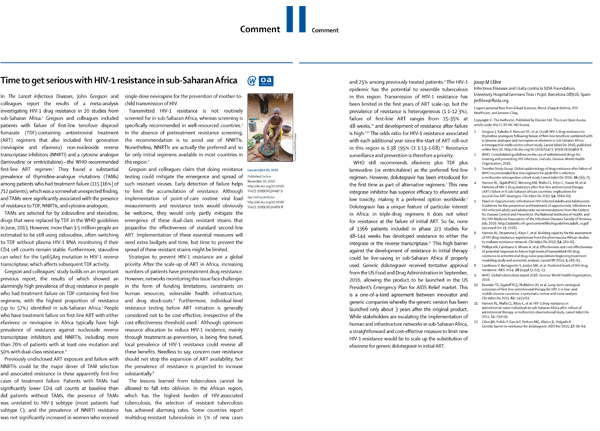