Researchers with the Centre for the AIDS Programme of Research in South Africa, or CAPRISA, a consortium of South African and North American scientists, analyzed genetic codes (de Oliveira et al. Lancet HIV 2016) from study subjects in South Africa to try to pinpoint biological factors that may contribute, along with behavioral factors, to the large number of infections. 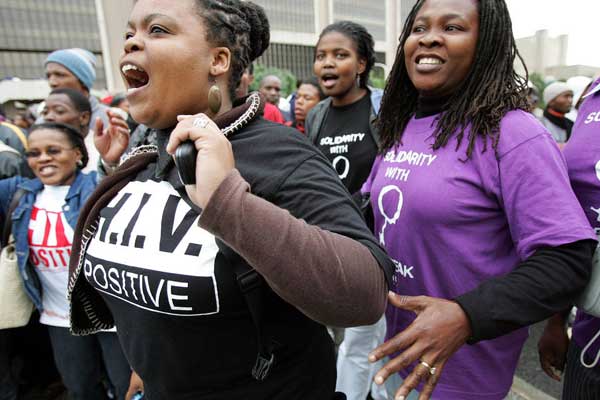 A march against the rise in HIV infection in Cape Town, South Africa. Adolescent girls and young women account for one in four new HIV infections in sub-Saharan Africa, according to the Joint United Nations Programme on HIV/AIDS. Photo: Reuters

By Betsy McKay, NEW YORK, July 18, 2016 7:10 a.m. The findings were striking, and could help chart a path to reduce the number of new infections in young women and girls?one of the greatest challenges for health officials combating HIV in southern Africa, the epicenter of the global epidemic, according to Salim Abdool Karim, director of the consortium and leader of the research team. 'These three studies give us new insight and new evidence in how to improve our HIV prevention program for women in southern Africa,' he said in an interview.

The findings were striking, and could help chart a path to reduce the number of new infections in young women and girls - one of the greatest challenges for health officials combating HIV in southern Africa, the epicenter of the global epidemic, according to Salim Abdool Karim, director of the consortium and leader of the research team. 'These three studies give us new insight and new evidence in how to improve our HIV prevention program for women in southern Africa,' he said in an interview.

The research will be presented at the 21st International AIDS Conference in Durban, South Africa, on Tuesday.

Adolescent girls and young women account for one in four new HIV infections in sub-Saharan Africa, according to the Joint United Nations Programme on HIV/AIDS. Nearly three quarters of new HIV infections in adolescents in sub-Saharan Africa are in females. But the need for more prevention programs comes after funding for HIV efforts from donor governments to low- and middle-income countries globally fell in 2015 for the first time in five years, according to the Kaiser Family Foundation and UNAIDS.

Results from a separate study, also to be presented Tuesday, offered new hope for preventing HIV infection. The analysis found that a vaginal ring that continuously releases the HIV drug dapivirine reduced the risk of HIV infection in women by at least 56%.

In one study of a South African community, the CAPRISA researchers analyzed the genetic code of HIV from each of 1,589 HIV-positive people, tracing an unrelenting cycle of HIV transmission in which women under the age of 25 are routinely infected by men who are on average 8.7 years older than they are. The researchers found that girls between ages 16 and 20 are infected by men 11.5 years older than they are. Open access publication (de Oliveira et al. Lancet HIV 2016)

The men in turn are infected by women their own age?many of whom were given the virus by older men when they were younger. Nearly 62% of women in the study ages 25 to 40 were HIV positive. 'This cycle is the engine that ensures you have continuing high rates of HIV,' Dr. Abdool Karim said.

The researchers then showed how an abundance of certain bacteria in the vagina put women at greater risk of HIV infection and make a preventive drug less effective. Analyzing more than 3 million genetic sequences from 120 South African women, the CAPRISA researchers found that those with large amounts of a particular bacterium, Prevotella bivia, had a 19.2 times greater chance of inflammation and HIV infection than those who had low levels or none of this bacteria. The bacteria may release a molecule linked to HIV infection, the researchers found.

The CAPRISA researchers then analyzed genital bacterial proteins in 688 women. They discovered that a microbicide?a compound to prevent the transmission of sexually transmitted infections?containing the drug tenofovir was effective in the 61% of women who had predominantly 'healthy' bacteria in their vaginas. But it had little effect in the remaining women, who had large amounts of gardnerella bacteria. The bacteria absorbed much of the drug, rather than leaving it to fight off HIV.

The findings provide evidence that young women should be tested regularly for bacterial infections and treated if they have them, Dr. Abdool Karim said. They should also be offered HIV drugs for pre-exposure prophylaxis, or known as PrEP, to prevent infection, he said.

'PrEP is not promoted in this younger population and this series should make people rethink whether it should be offered to them,' said Thomas Quinn, an HIV/AIDS expert at the U.S. National Institute of Allergy and Infectious Diseases and professor of medicine at Johns Hopkins University, who was briefed on, but not involved in, the research. 'These young women have superhigh infection rates.'

He called the research 'a nice blending of behavioral with biological sciences.'

The research is particularly important because sub-Saharan Africa is experiencing a boom in its youth population, as mortality rates have dropped, according to Deborah Birx, the U.S. global AIDS coordinator. It also helps to explain why microbicides have appeared in studies to be less effective among young women than other age groups, said Dr. Birx, describing the work as 'groundbreaking.'

Scientists had concluded that the women weren?t using the microbicides regularly, because they couldn?t find evidence of the drug in their bodies. More studies should be done urgently, she said. 'This is really quite extraordinary,' she said. 'We were making the assumption that the women were noncompliant when it may have been biological,' she said.

The U.S. government was a funder of the research, through several agencies, and its key global AIDS program, the President?s Emergency Plan for AIDS Relief, funds efforts to address the epidemic in young women.

Dr. Abdool Karim said that he hopes that researchers undertake similar studies in other countries in southern Africa, to see if their findings match. He said that he would be 'surprised' if the CAPRISA findings don?t apply there too.